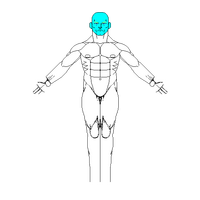 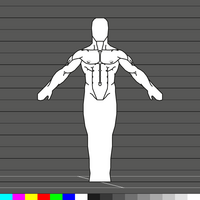 I've been working on Guy Tough's initial Sprite design more. While also thinking and writing notes about how the Sprite animation pipeline should work, to think about what kind of art style I want for the game, now that I have the basic format and parameters locked down.

In these two tests I first tried a low resolution pixel sketch, thinking I could animate the sprites in pixel art, for a 1080p screen resolution, at 1 pixel line width, then trace over them in 11520p, at 10.667 pixel line width,  using vector line art. The idea being pixels are quicker to draft and animate, then the vector lines would allow me to clean up and refine over the pixel art.

In the second test I decided to skip the pixel sketch stage, because I would essentially be drawing everything twice, doubling the animation time. I'm trying to make the Sprite pipeline efficient to save time when I do get into heavy Sprite production for the game. So I just went directly to making the Sprite art with 10.667 wide lines in Illustrator, at 11520p, the highest resolution the game will target.

I left each one unfinished when I decided not to go with that approach. Since then I have decided to start in 11520p vector art, but use shapes only, with no lines. This is because I felt the lines were too bold, so they forced a simpler art style. But I want Tough Guy's characters to have intricate, anatomically accurate musculature on every frame of animation. I also want their clothing and hair to be rendered in precise detail. Not things like textures or small scratches, but things like tufts and strands of hair, folding in clothes, and other forms that will manipulate dynamically during animation.

To have line art which is visible at 1080p, it would have to be 1 pixel wide when rendered in 1080p. I also want the lines to be visible at 720p, so the lines would be 0.66 pixels wide at that size. However, if I get rid of the lines entirely, and only use shapes, I don't have to worry about a minimum line width. I can make the art in whatever way I want without worrying about lines not being thick enough to be seen at lower resolution options. Which turned out to be a very obtrusive style restriction when I made this test Sprite artwork.

The decision not to go with lines was also inspired by comparing SNK to Capcom 2D sprites. Street Fighter 3, for example, uses lines on its sprites, which are then softened by adding gradients to them. That is what I was going to do with Tough Guy's Sprite lines. However, upon closer inspection, the anatomy drawn on the sprites in Street Fighter 3 are very iffy in places, you clearly couldn't make realistic, accurate muscle anatomy with lines this bold while keeping the lines at a uniform, or minimum, width, with the camera zoomed out as far as it needs to be for a beat 'em up, or fighting game.

For comparison, see the sprites in SNK Vs Capcom, or "SVC Chaos". I particularly like Balrog's (Boxer) Sprite in this game. It's clearly based on his Sprite from a Capcom game, maybe from the Street Fighter Alpha series. But it's re-shaded in SNK's Sprite style. The main difference between SNK and Capcom fighting game sprites was that SNK fighting games used a lot less lines and focused just on shapes instead. This gave a more realistic, less cartoonish look. Especially when you compare some SVC Chaos takes of Capcom characters, with their original sprites from their home games. You can also see the reverse in effect when SNK sprites were rendered in a Street Fighter Alpha style for Capcom Vs SNK, the Capcom developed equivalent.

So in the next week, after this weekend, I'm going to resume designing Guy Tough's Sprite, but in this lineless, shape only style of 11520p vector art. To go for a more SNK inspired Sprite rendering style, away from the bold, single pixel wide Capcom style lines.

In addition to shapes I'll also be using gradients and transparency to modernise the old SNK rendering style and make it my own. Thanks to the automatic colour indexing and dithering method I'm using in the Sprite pipeline, I can use the full range of greyscale shades for the game's vector artwork, and it will translate when posterised to 9 indexed shades of grey. That grey colour is then separated into different placeholder colours, using CMYKRGB to separate the 7 placeholder colour ramps. The indexing is done to enable dynamic palette colour allocation in-game.

I'll be back with an update when I get some art done in this new lineless, shape-only Sprite style. Or I may develop a simple character movement and world space collision prototype before then, using boxes as stand-ins for characters. Whatever gets done first.